“White bone found on the grazing: the rough, porous language of touch
and its yellowing, ribbed impression in the grass….”

Artists and craftsmen have always been fascinated by bone, their work often exploring the dichotomy of nature and artifice: it is an investigation of life and being. There is more than enough evidence from our ancestors who carved swimming reindeers onto antlers, fashioned weapons and tools such as spear throwers,  knives, awls, fish hooks and needles as well as creating decorated flutes, whistles, toys and pendants. However, contemporary society mainly associates bones with suffering, demise and as a gloomy substance,  rather than as a tool of expression and voyaging.

The British artist Emma Witter utilises intricate bone structures to create fragile, flower-patterned forms. To her, this organic material conveys beauty and spirituality rather than mortality. These opposing facets inspire Witter to bring to the surface the relics of domestic animals. She acts as a bone collector who salvages her medium from restaurants, butchers and her own cooking waste along with combing the river Thames.

Interested in the history of this hard, whitish skeletal tissue and its past use, Witter states:  ‘the material reveals much more and dictates the works’. She does not sketch her ideas onto paper, she works with her hands, engaging in small three-dimensional experiments, testing how the individual segments assemble and embrace each other. Her method is visceral, envisaging her finished effigies.
Her opaque miniature blossoms are made of countless carefully selected bone fragments orchestrated into delicate floral arrangement. They are attached onto small stands, displayed in glass vessels or directly on the wall to appear like beautiful, surreal botanical models and modern-day memento mori.

The cleaning process is painstakingly slow. It involves boiling and scrubbing the bones clean before they submerged in bleach and dried. Larger and more greasier specimens are placed in salt for several days in the attempt to extract any last oils, to achieve a dry texture and a clean white colour. Witter organises her findings systematically into size and their anatomical shape, akin to a tool kit. She uses different instruments and glues to construct her intricate pieces before she carefully applies a layer of painters’ gel medium on their surface which acts as a sealant to prevent the glue and bones becoming brittle.

Witter, who grew up in Hertfordshire, was immensely inspired by Henry Moore ‘s bone derived sculptures and visited Moore ‘s maquette studio regularly. She has also been influenced by Eileen Agar’s approach to nature and transformation through found objects and unorthodox juxtaposition that challenge  our macabre relationship with bone.

Emma Witter is a London based artist. In 2008, she earned her diploma in Art and Design from The London College of Fashion. In 2012, she received a first-class honours degree in Performance Design and Practice from Central Saint Martins. On graduating, Witter won the ‘Seed Fund’ Award’ from the University of the Arts London – a grant to set up her own studio practice. At the same time, she was awarded a start-up grant from The Princes Trust Enterprise Programme. After a year of studio practice, she was nominated for the ‘Best New Business Award’ during UAL Enterprise Week 2014,  and won. Other awards include ‘Eccentric Artist of the Year’ 2015, from The Eccentric Club – and the category of ‘Personal/Non published’ in the Creative Review Photo Annual 2015. She was selected at the Worth Global Style Network talent section as ‘One to Watch’. Her work has been featured in publications such as The Gourmand, Vice Munchies, Mosaic Science and many more.

Witter has participated in numerous exhibitions, most notably her solo show ‘Bloom’ at Hix Art 2018, an exhibition resulting from her three-month residency at Hix’s Tramshed restaurant. She was selected twice for the ING Discerning Eye show at The Mall Galleries 2017, and The London Group Open at The Cello Factory, in 2015 and 2017.Currently, she is a studio resident at Sarabande, the Lee Alexander McQueen Foundation, in London. 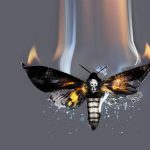 FT HOW TO SPEND IT | “Fantastical Floral Creations Skirting the Line Between Painting and Sculpture..”

THE PROTAGONIST MAGAZINE | “To The Bone: Emma Witter”.

THE ART GORGEOUS | “How to Transform a Bone Into a Flower”.